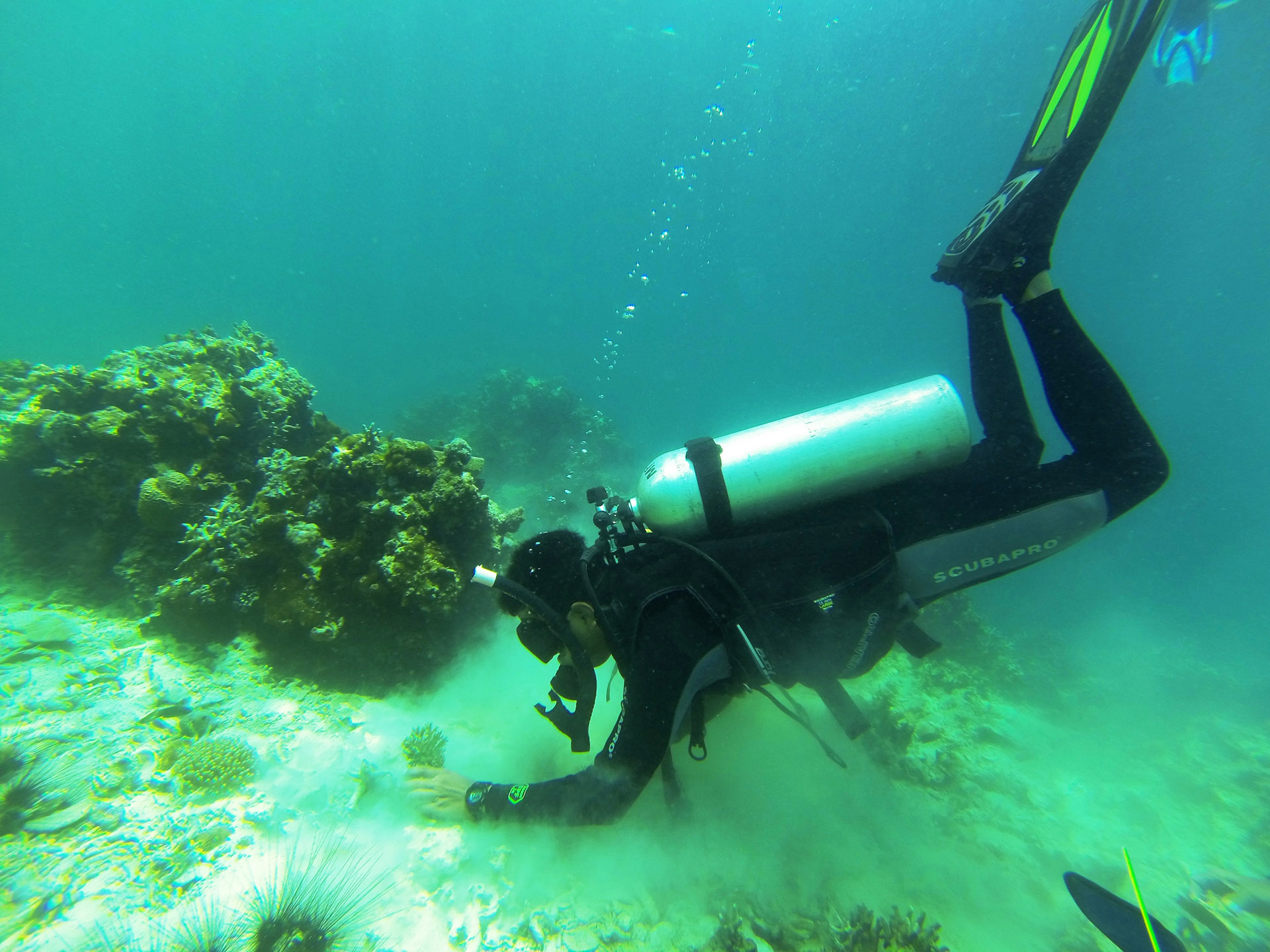 Reviving Our Reefs and Oceans

Adopt-A-Marine Protected Area (MPA) is a conservation fund-raising program to help the Philippines protect and conserve biologically-important coastal and marine areas in North Palawan, Oriental Mindoro and Batangas City which have been legislated as MPAs, marine management zones or fisheries management areas.

The Philippines has been identified among the world’s conservation hotspots despite having been cited among the earth’s 17 megadiversity countries on the planet (World Atlas, 2017).  This is likewise amidst findings by distinguished international marine scientists in various scientific researches that the Philippines is the center of the center of marine biodiversity in the world (Carpenter and Springer, 2005; Allen, 2008; Tittensor et al, 2010; Sanciangco et al, 2013), indicating the urgent need to have in place on-site effective management and protection of the country’s marine ecosystems by resource owners and users.  It has been determined that less than 10-15% of the Philippines’ designated protected areas have effective management (Campos and Aliño, 2008).

The Philippines: Center of the center of marine biodiversity
The Philippines possesses the most number of marine species per unit area on the planet as evidenced by scientific data collected and published by several studies conducted from 2005-2013 by internationally-renowned scientists and specialists in the field of marine biology. 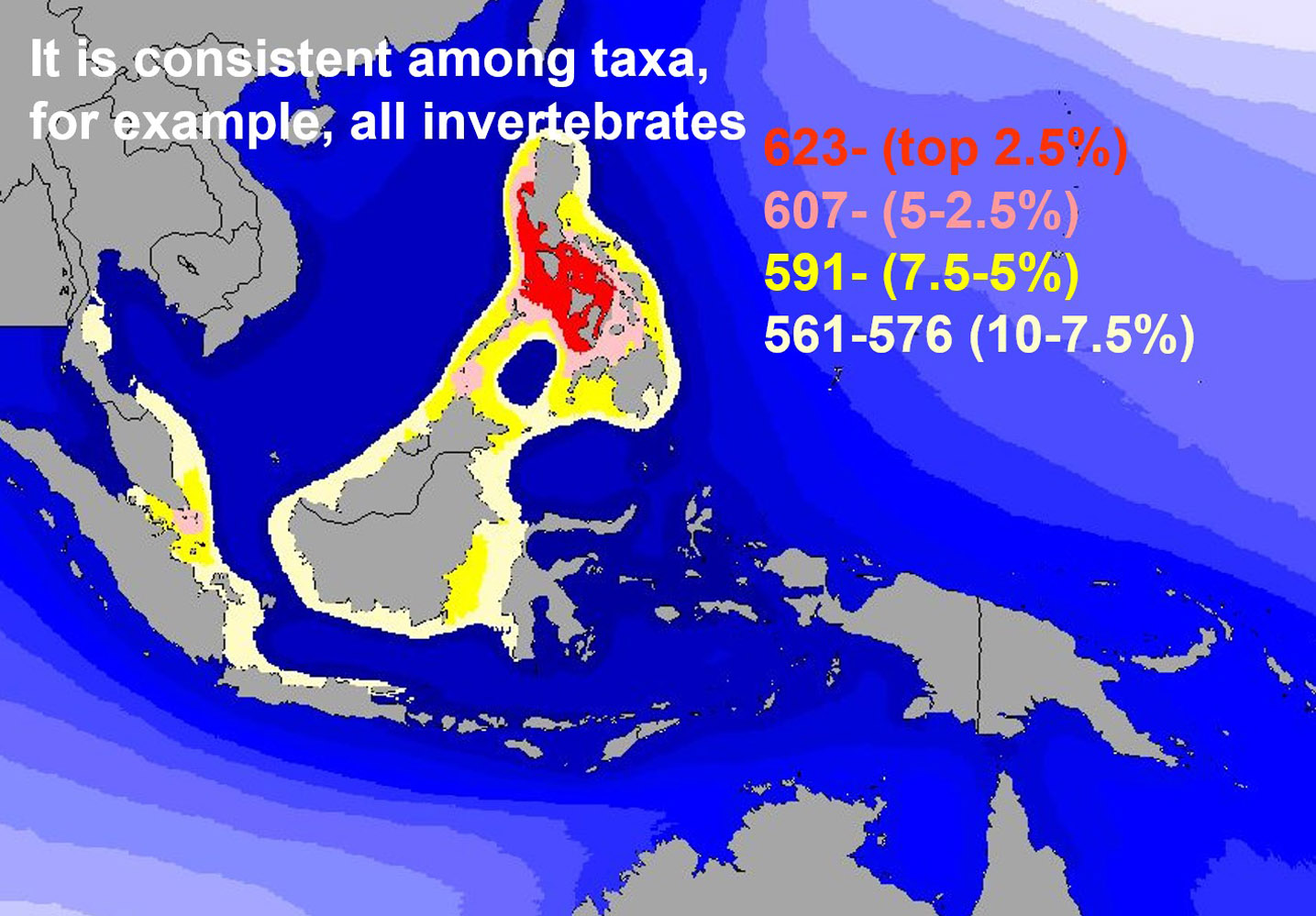 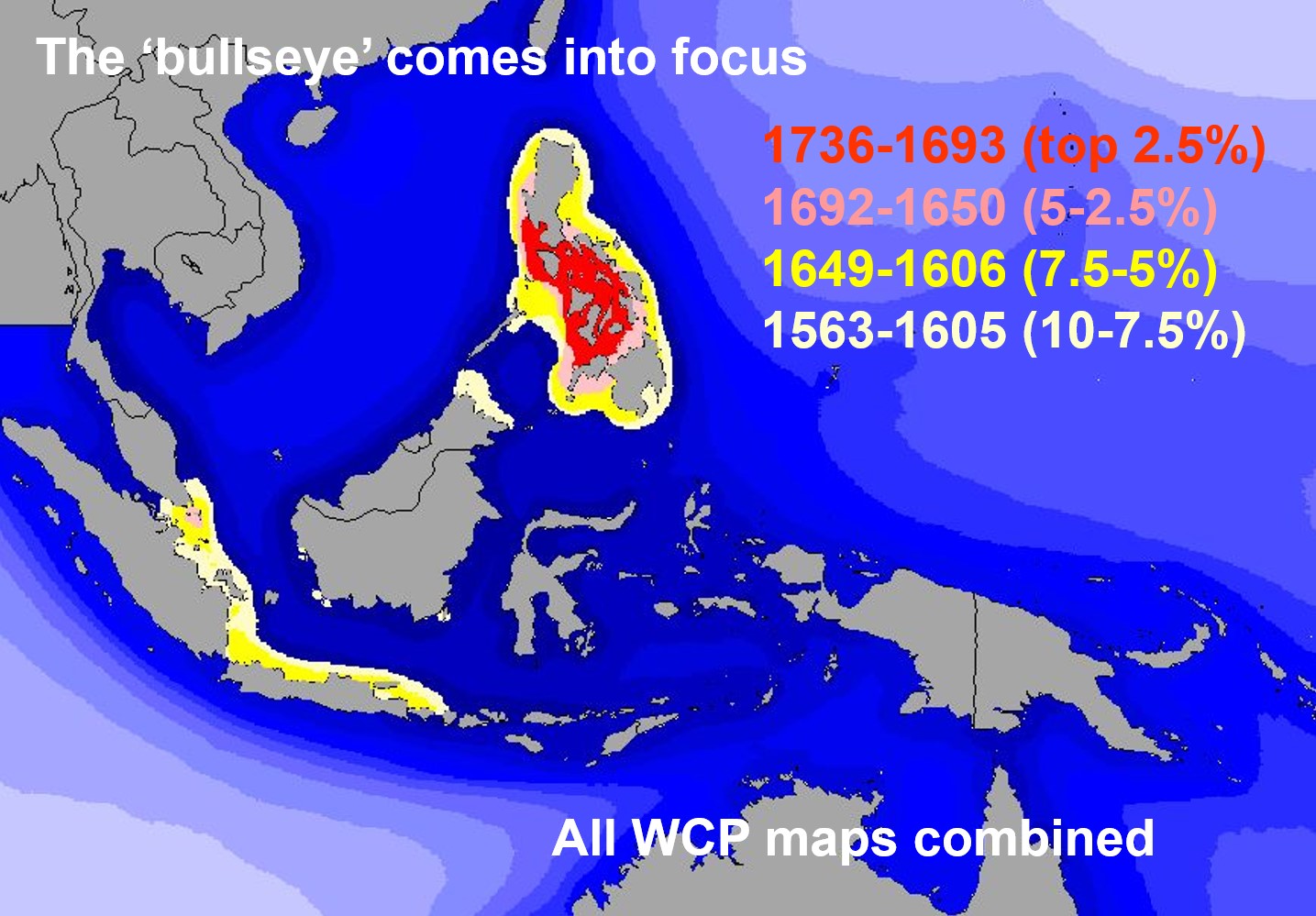 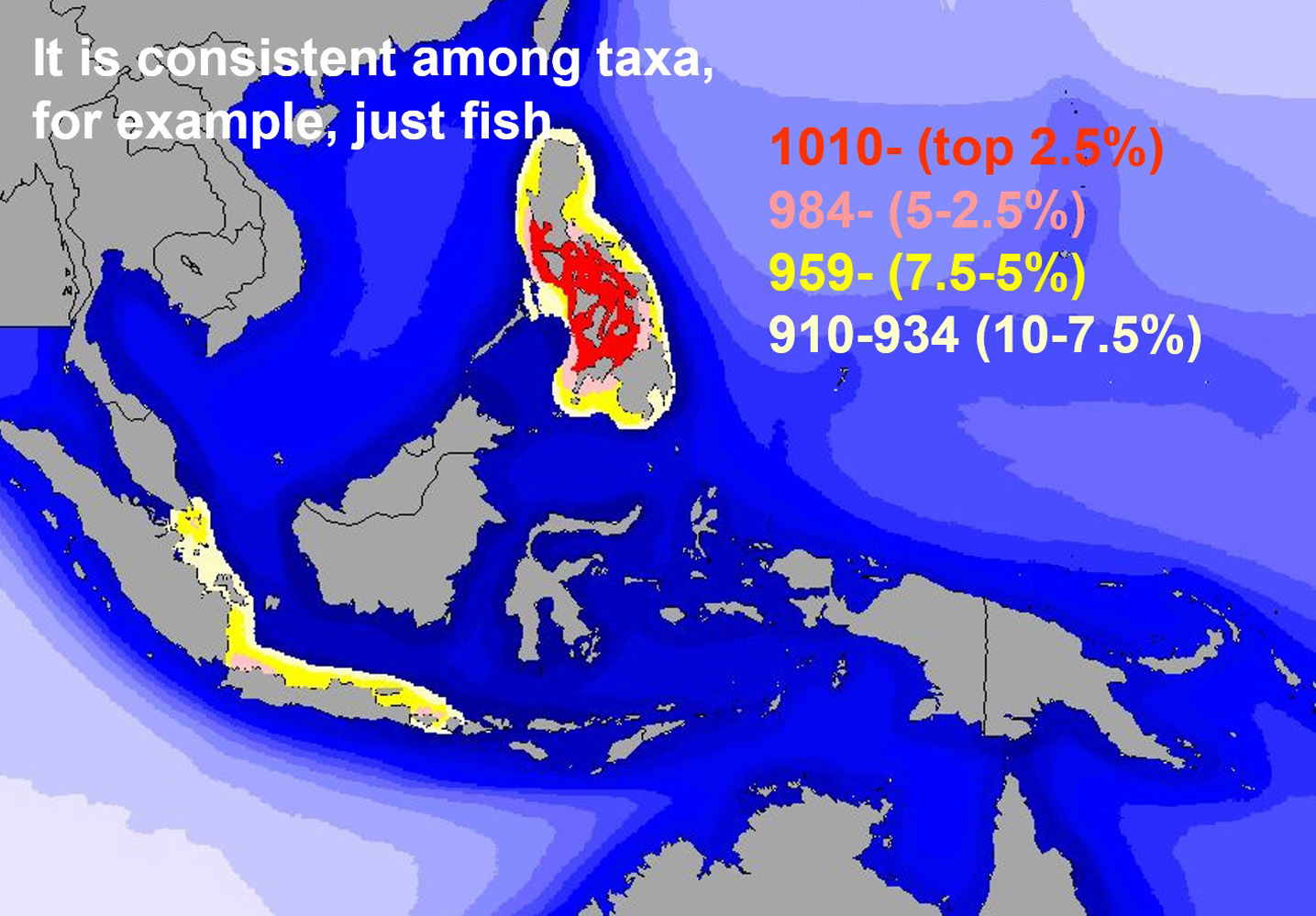 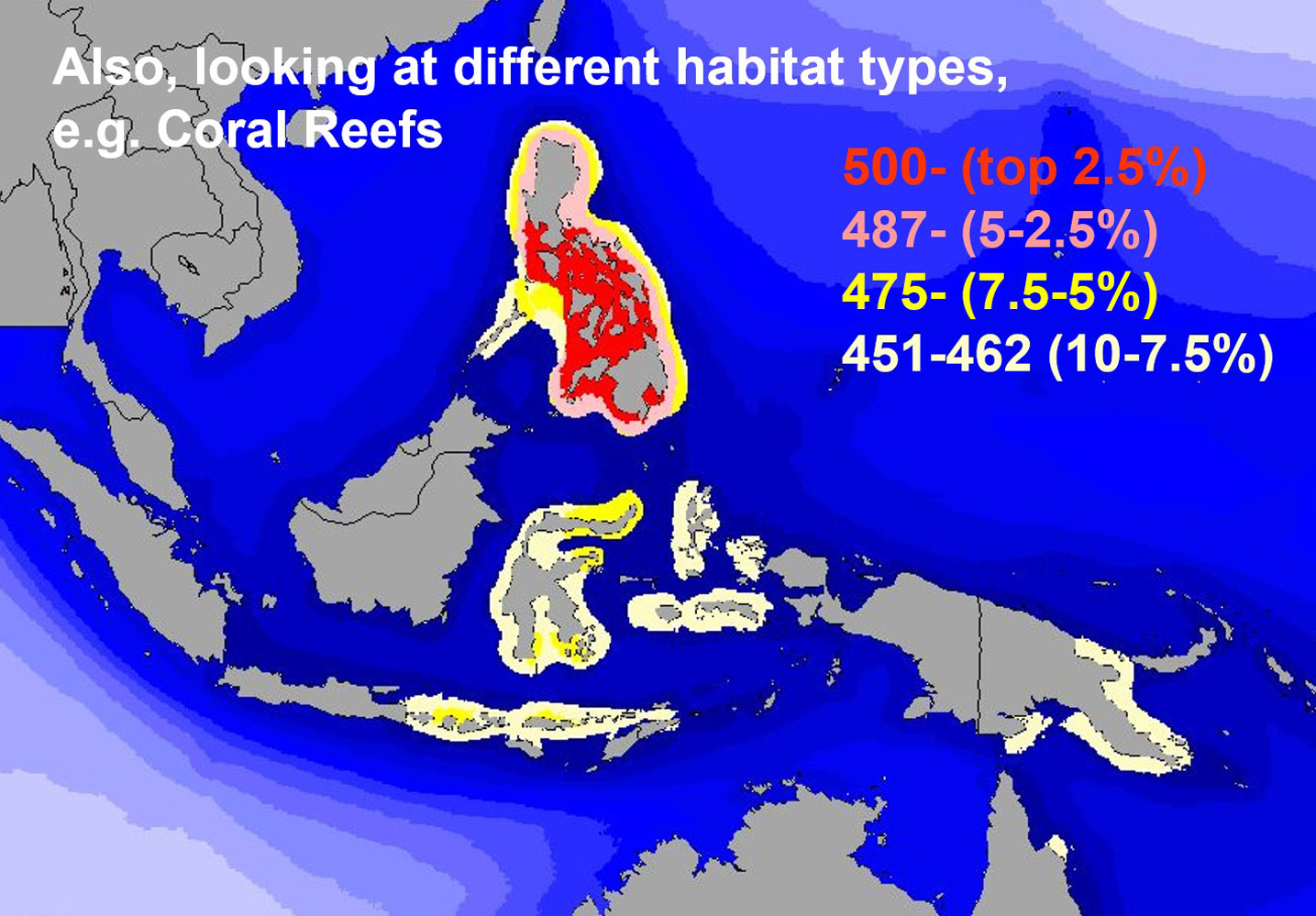 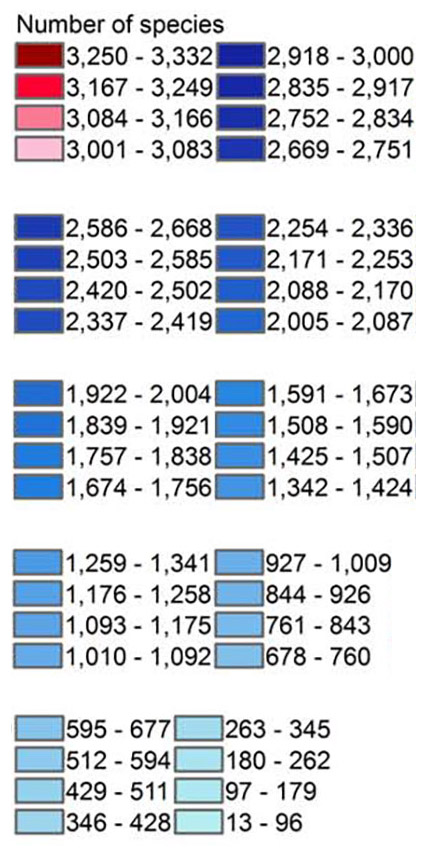 Concentration of species in the coral triangle with Philippines as center 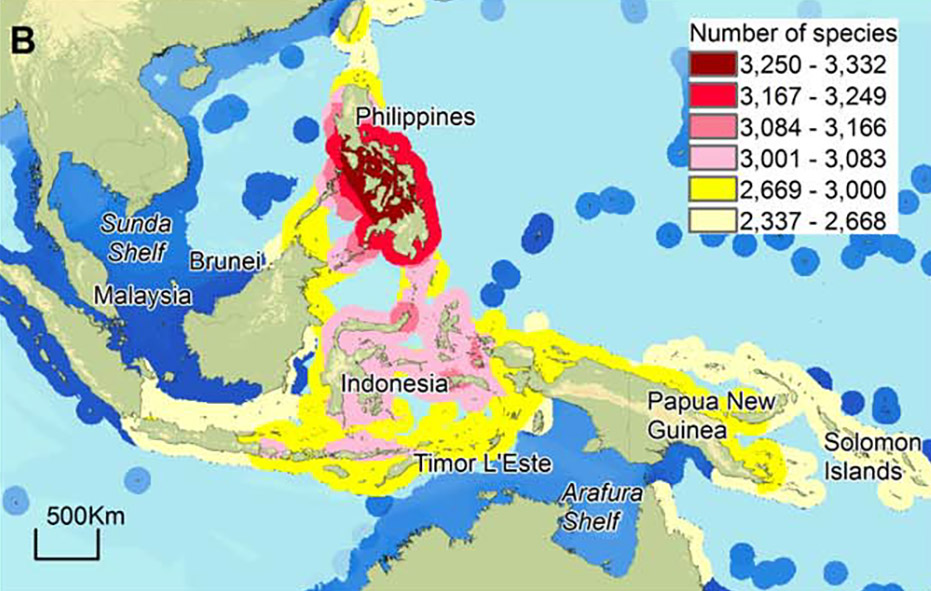 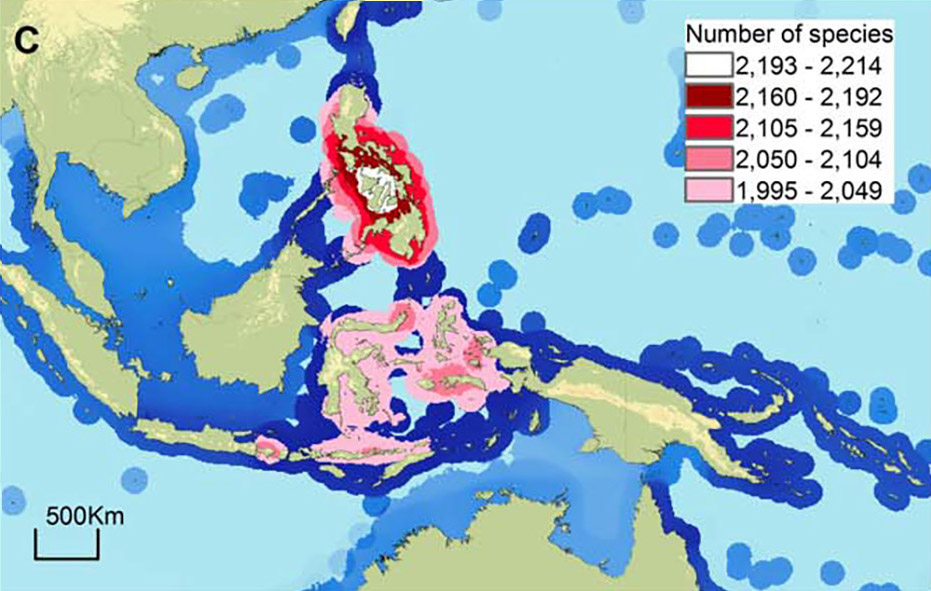 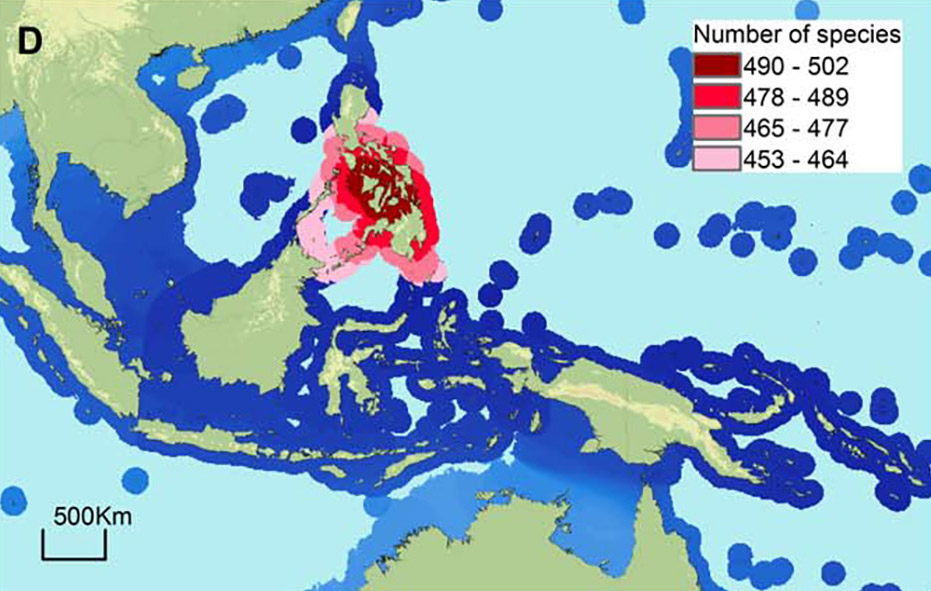 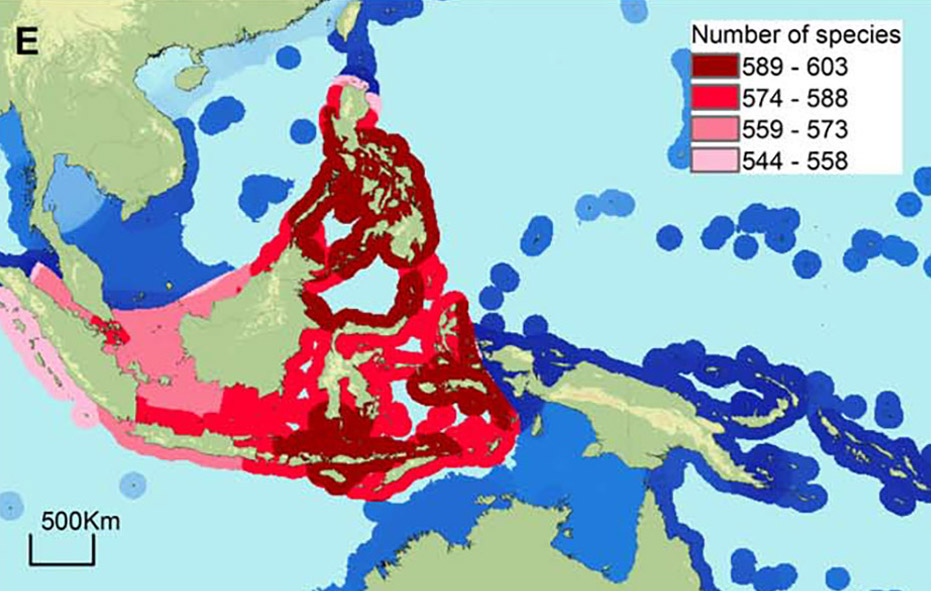 Unfortunately, degradation of the Philippines’ marine and terrestrial ecosystems has been widespread since the 1950s due to exploitation and destructive methods of extraction, sometimes leaving irreversible damage in the process.  Other anthropogenic root causes include indiscriminate land and coastal development, poor or lack of waste management systems and deforestation.  The consequences of these human actions have been evident in increasing severity and impact of natural disasters on humans, as well as reduction in the biological productivity of ecosystems for the benefit of people and animals alike. 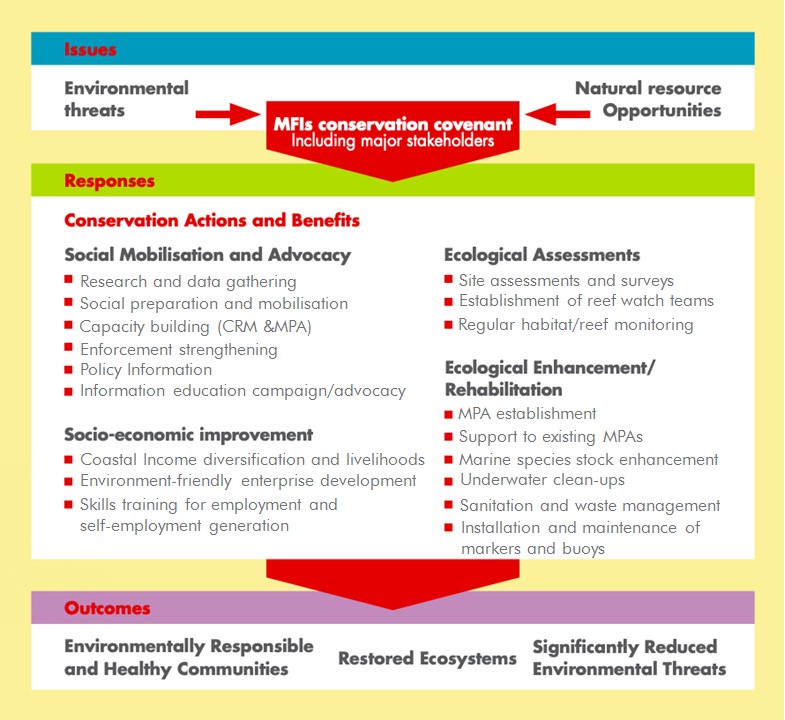 Since 2013, thirty-six (36) conservation agreements have been signed covering 31 seaside communities, with a total of 334,276 hectares of new MPAs, marine management zones and fisheries management areas established by the partnerships by end-2020.  Regular conservation actions at the grassroots level are continuously undertaken with partners. 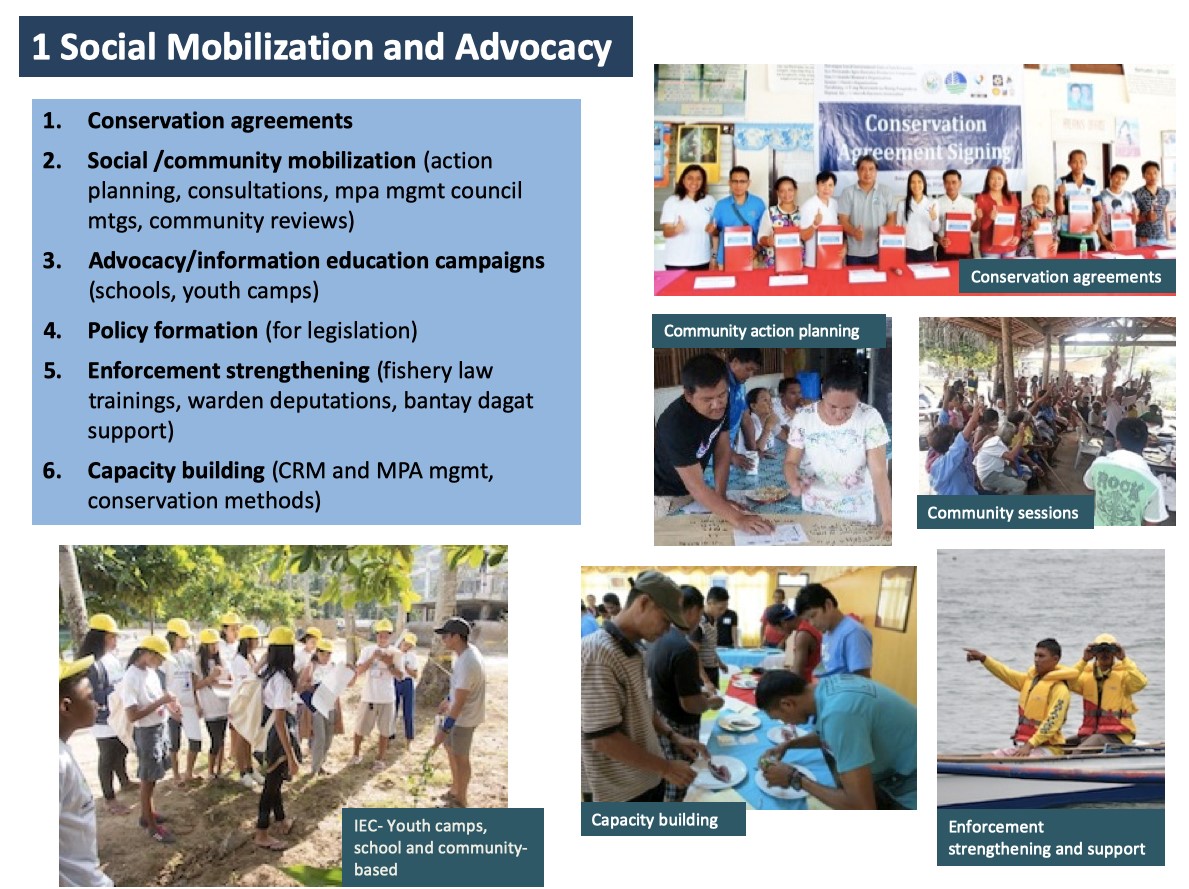 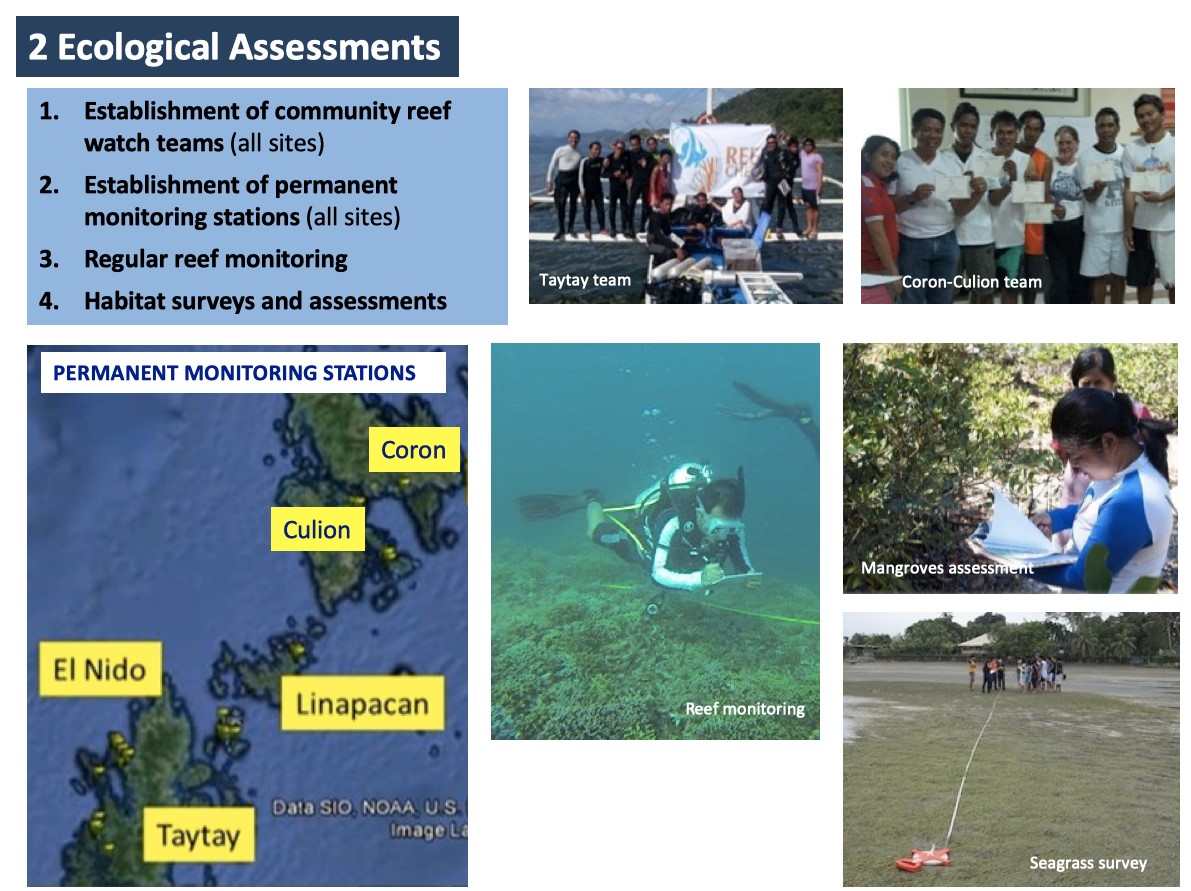 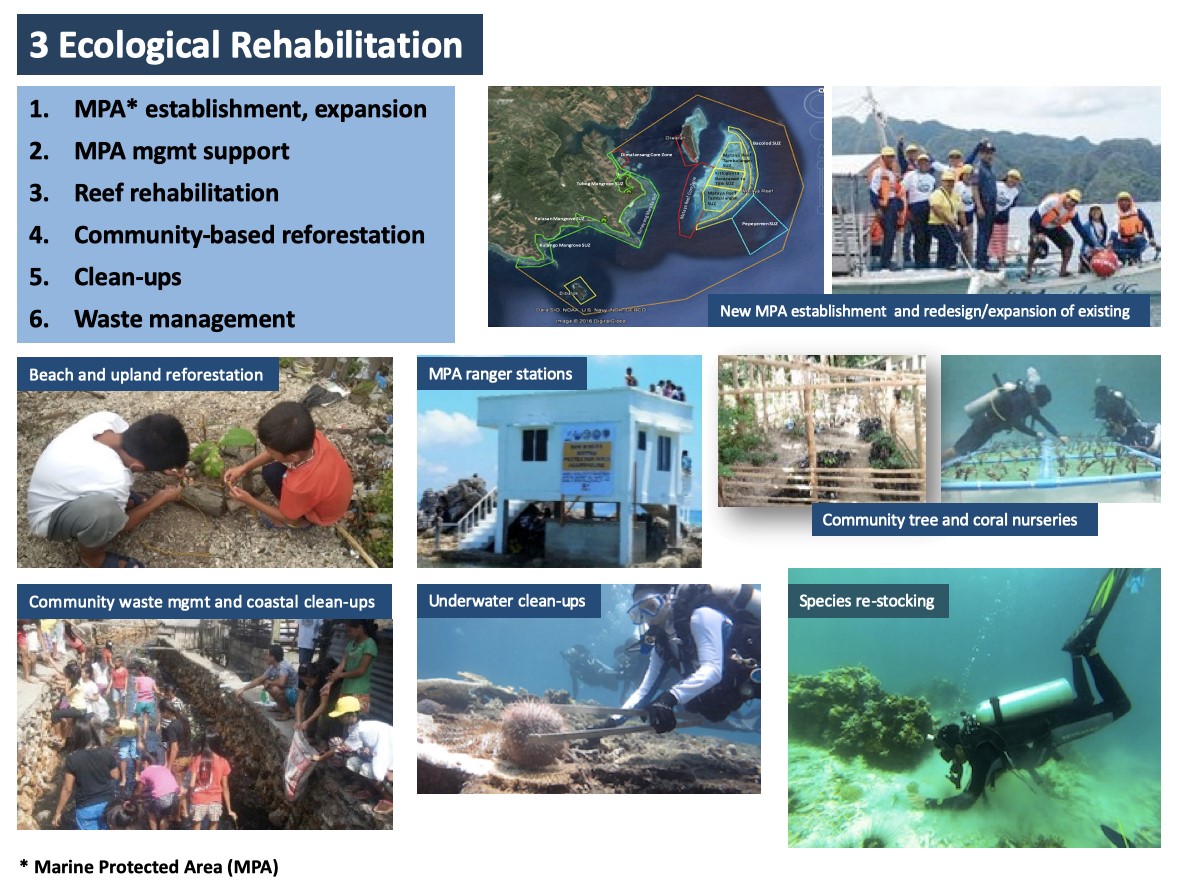 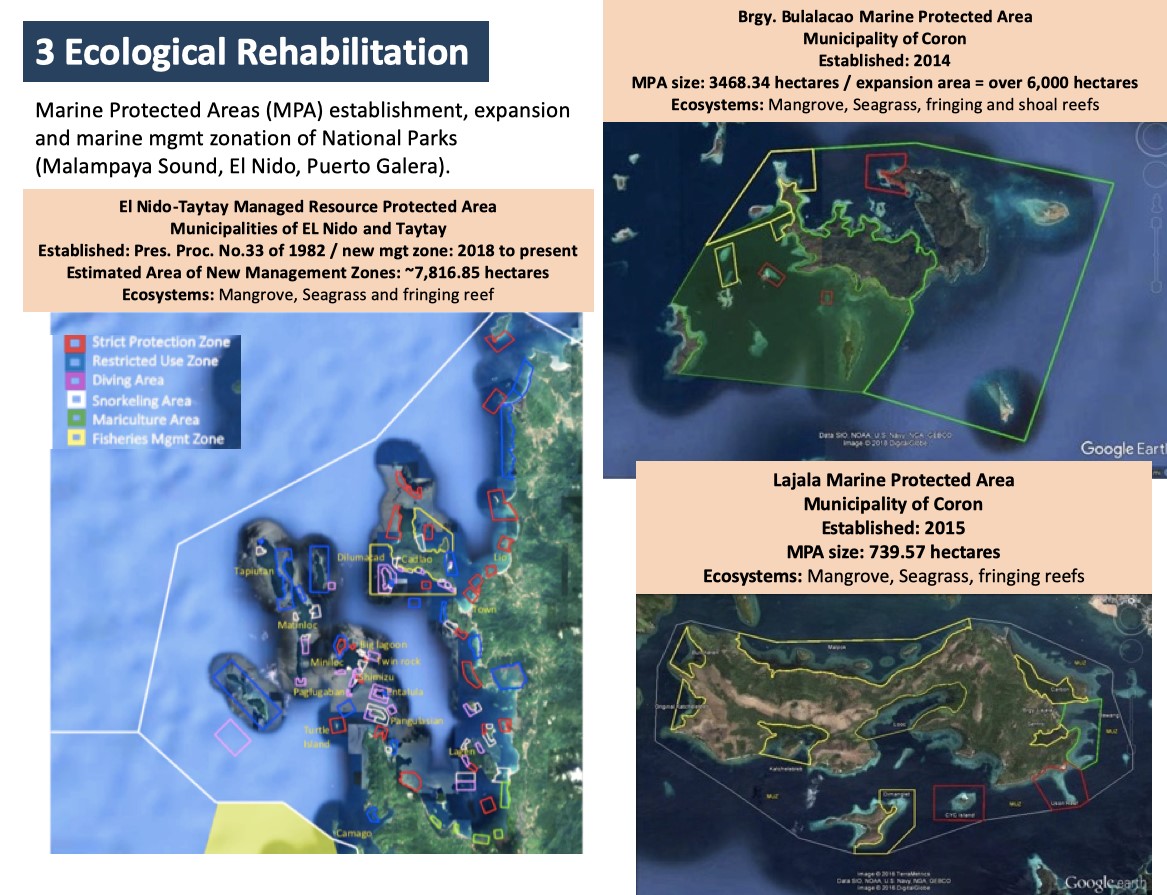 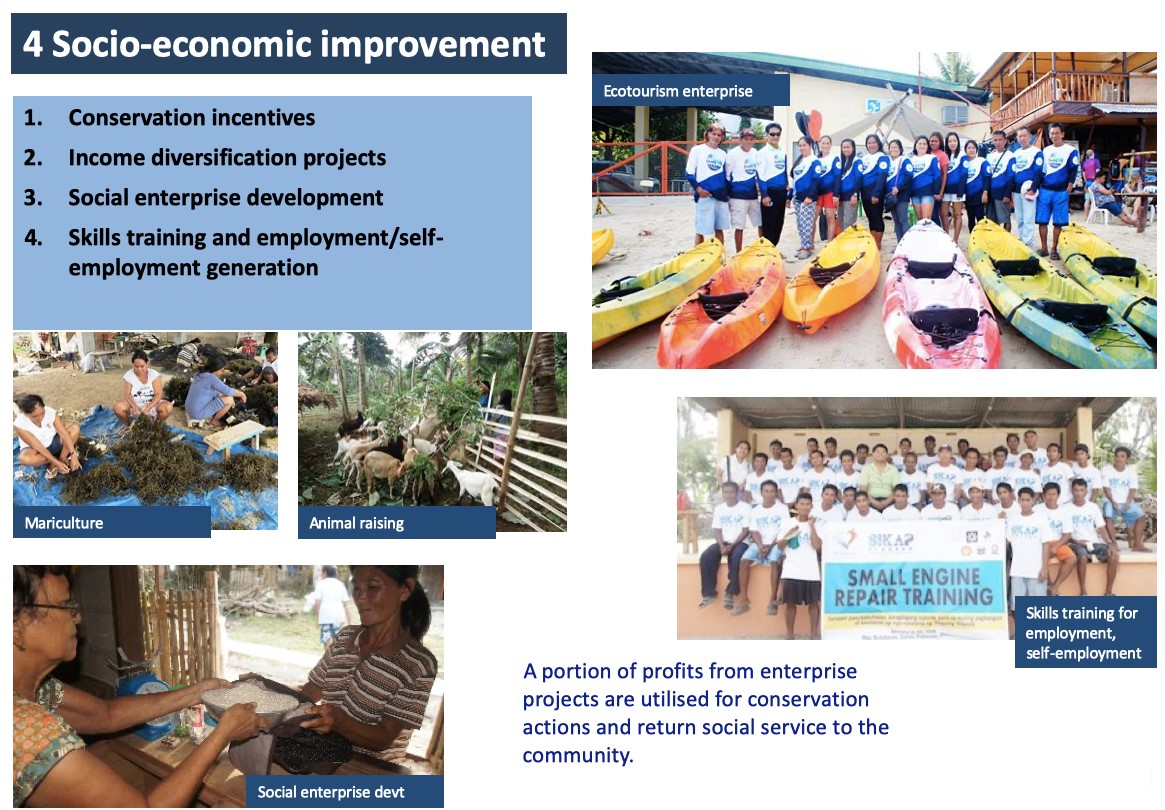 Biophysical Recovery
With proper socio-political support and active management of marine protected areas by resource owners and users (coastal communities and local governments), biological recovery follows as seen in all of the MPAs that have worked towards effective management over the years.  From baselines taken in 2012-2013, some sites have demonstrated significant trophic level recoveries with evident return of endangered species like black-tip sharks, napoleon wrasse, turtles and other high-value reef fishes and pelagics.  Fish abundance is likewise observed in many areas, albeit not recorded as part of the program’s monitoring tool for fish, which is limited to indicator species such as Groupers, Snappers, Parrotfishes and Butterfly Fishes which are easily depleted through anthropogenic over-extraction and coral damage.

Impacts of natural events such as typhoons and bleaching from ocean warming are still evident on the corals, however, resiliency is demonstrated with recovery of fish abundance visible in a short span of time after such events have passed, compared to areas with ineffective or no management.

Accolades and Recognitions as Best-Managed MPAs

At the regional and provincial levels, other MPAs included in the program’s scope have received citations and recognitions as follows: 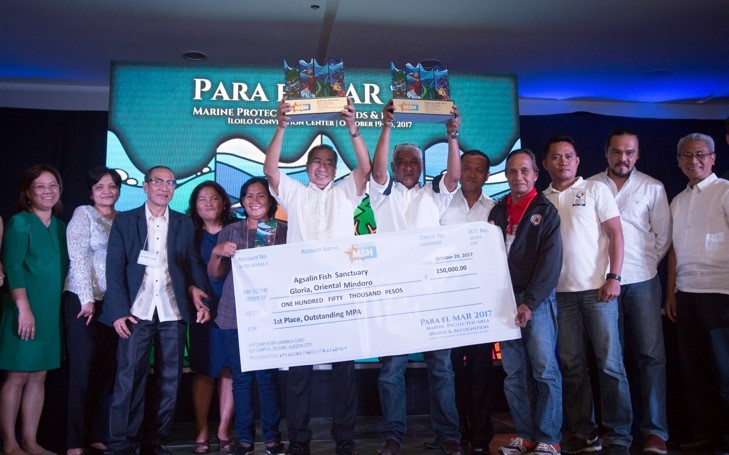 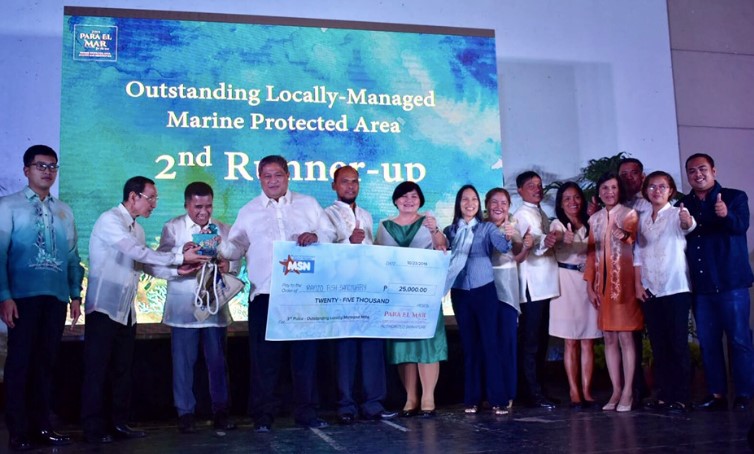